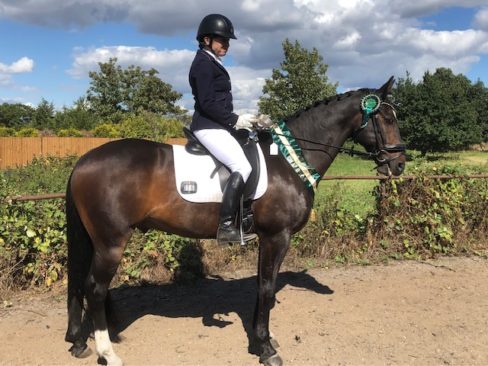 Above Teresa Langley on Toyboy

Well done to all our members who came along and took part in the 2019 Summer Championships which was held at Woodlands Stables on 1st September.  All the Championship classes were sponsored with some lovely prizes and winners received a trophy with a rosette and sash.

First up was the Junior Intro Championship which was won by Grace Sears on her lovely grey Olive and she was presented with a well suited pink saddle cloth from the Inter County Team Essex.

The Senior Intro Championship which was sponsored by Animal was won by Gemma Forester on Amanda A Crowley’s HVL Latina on a score of 68.3%  with Emma Cook and Jimmy May runner up on 65.9%.

The Junior Prelim Championship which was also sponsored by Animal was won by Rose Sullivan on Keiko and she won the Macloud Challenge Cup.

Barry Webb on Oreo topped the Senior Prelim Championship class with a score of 68.15%,  the class was sponsored by Bedsoft, and Barry was presented with the My Oliver Trophy.  Steve Macatonia was runner up with Charm Diamond on a score of 65.2%.

The Novice Championship was sponsored by Crown Corner and was won by Emma Hodges riding Jane Devereux’s Poppy on their score of 67.1% with  Sarah Oakley taking  2nd place on Fifi  with a score of 66.25%   Emma went on to be runner up in the Pick A Test Championship (all Elementary tests) behind the Champion Hilary French who won the the Giplin Trophy with 65.9% on David’s Franks Joseph.  This was also sponsored by Crown Corner.

The Music Freestyle Championship which was sponsored by Bedsoft for the River Trophy was won by Teresa Langley on Toyboy.

Very well done to all who took part and to Gemma Pye for judging all the classes.  Thanks also to helpers and committee members without whom these shows couldn’t run.

Our next show is on 22nd September and as always we are looking for help, then closely followed by the Area RC Dressage and Combined Training which we are running on Sunday 6th October at Brook Farm.  Please come forward if you can offer help on either of those days, you will be given a voucher for a free entry to one of our shows.