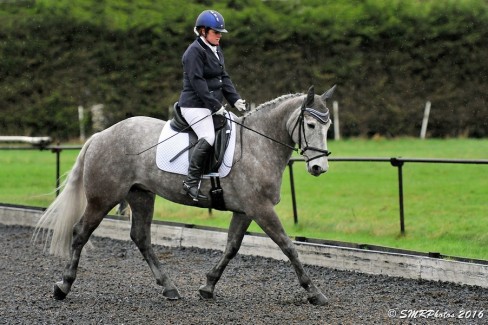 On Mothering Sunday we had our first Team Quest event at Woodlands for this year . Plum Princesses won with an overall score of 193%. They were closely followed by Dream Team who jointly scored 188%

March 11th was also the sixth competition of our winter league and we are grateful to our judges Paul Cornish and Vicky Fry for helping to make the event a success.

Music Freestyle is a regular feature of our winter competitions and Coleen Taylor with Colrouge Frost were back on form, winning this class with a handsome 71.9% and winning 10 league points. This combination also won the sixth class, Novice 39 with a score of 68% and another 10 league points.

At intro B junior member Rocky Leahy on Polaris Pelrose scored 64.6% and 10 league points. Emma Cook on Black Beauty won both Intro B seniors and Intro C seniors with scores of 67.6% and 68% and this combination also picked up 10 league points per class. Another new partnership joining the competition were Rachel Kellett and Sandyford Buddy and they scored 58.9% Intro B and they won their Prelim class scoring 62.4%. overall they won 10 points for first place at Prelim and 9 points for second place Intro B. Holly Nelmes Faint on Maestro won the Prelim class junior level with a score of 62.6% and they also won their second Prelim class with a score of 59.2% so they too gained 20 league points on Sunday.

In Class 5 Teresa Langley and Toyboy came back to their old winning standards and scored 62.7% winning the Novice 30 class and picking up 10 league points. Hetty Colchester and Red came second scoring 59.2%

At Elementary there were two riders, Samantha Williams on Jim Murphy and they scored 65.6% and they were closely followed by Laura Vandervleit on Burywood Chess scoring 64.8%

The final chance to qualify for the Championships is on Sunday April 8th and this is also the last opportunity to win points for trophies too.

Please note we also offer Chiltern and Thames Qualifiers and many riders also rode to qualify for this competition too .

Our AGM will be held on Saturday 28th April and club trophies will be awarded followed by a Quiz.